Next up in our core ranking golf ball articles is our best low spin golf balls 2021-2022 ranking list. This one pick’s up where last years left off and will be one of the ones we intend to keep going forward with in the future.

Like all of our 2021-2022 golf ball rankings we have introduced a new methodology and basis for our rankings. Now standard deviations are calculated and analyzed as a means of ranking of all of our key metrics. By doing so we have removed tendencies to incorporate any personal biases we may have. Now more than ever the numbers do the talking. By using the standard deviations, we also see a clear representation of how the ball is performing in relation to the others. We have done a similar exercise with this year’s golf bag reviews and found it extremely useful.

Since manufacturers now are trying to make balls that perform under specific conditions it is also important to understand how it will perform when those conditions are not met. Most of us are not so precise that we can replicate our swing speeds every time we pick up a club. We have also seen through our analysis that there very often is very small differences in actual performance. This is why standard deviations are so helpful. Do you want to pay for a ball that is in the 99th percentile in cost and the 60th in performance?

Our testing spin rates during our driver testing:

So, what are we looking for when talking about the best low spin golf balls? It is important that we detail the filters that we incorporated into our data set to come up with the short list of best balls. So here they are:

So only the lowest spinning options that are going to give you the best chances in getting the ball down the fairway from the tee are listed here…. 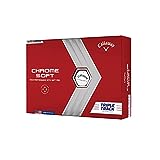 Callaway has retooled their Chrome Soft golf ball in 2022. Now a 3-piece ball (previously 4-piece) the Chrome Soft keeps its soft feel and lower compression to be a very playable ball across all levels of golfers.

When comparing our results between the two versions we saw the most noticeable difference being reductions spin rates across all of our tested swing speeds. With solid distance performance the Chrome Soft is a great option for golfers looking for soft feel and low spin. While for other tested categories like peak height, that saw lower comparative results, the reality is real measures we are looking at are not substantial.

Consistent ball flight at every condition with our Tour Aero design.

Why Is Chrome Soft Unique and Who’s It For?

The path to distance has evolved with the all-new TP5x. In 2017, a movement began with the optimal spin and launch conditions provided bChrome Soft 22 is designed for a wide range of golfers who want outstanding feel, excellent distance, and incredible forgiveness. Key performance characteristics include our signature Chrome Soft feel, more distance off the tee, low spinning iron shots, and a high level of greenside control.

The latest (2021) iteration of the TP5x is not a departure from its predecessor but rather a tweaking. TaylorMade’s TP5 series remains as one of the few 5-layered balls on the market. From our perspective the TP5x will be a ball that more golfers find attractive.

With higher launch angles and significantly less spin it is very manageable off the tee for golfers across all skill levels. Its low spin rates actually rated in the top echelon of balls we tested. It also gained a few more yards in the distance metrics in comparison to its sister ball putting it amongst the best in that category as well. While it does have a slightly harder feel than the TP5 it is still pleasant to putt with and would not consider this as a reason to opt away from the TP5x.

The all-new Tour Flight Dimple Pattern unlocks the next level of aerodynamics while still promoting maximum carry distances and a steep angle of descent for stopping power, especially on long irons.

TP5x is our fastest and longest Tour ball, featuring a 5-layer design with four increasingly stiff layers enclosed in cast urethane. It delivers unmatched performance off the tee and on the approach, without sacrificing feel on the scoring shots.

While maintaining the formula that makes TP5x a leader in speed and distance, we’ve added a softer cast urethane cover for increased groove interaction on greenside shots for more spin and improved feel.

THE PATH TO DISTANCE

The path to distance has evolved with the all-new TP5x. In 2017, a movement began with the optimal spin and launch conditions provided by our 5-layer construction. Then we increased ball speed with the HFM Speed Layer and now we’ve added advanced aerodynamics with the new Tour Flight Dimple Pattern.