We Continue our new series of golf ball core rankings with the best golf balls for playing into the green 2021-2022. This is a new core article falling under our golf ball reviews category. When we sat down and examined the data collected during our testing we realised that despite green side spin being a continuous metric and point of discussion none of the existing rankings prioritised it. Since we thought it could be of interest to some we decided to put it out there.

Like all of our 2021-2022 golf ball rankings we have introduced a new methodology and basis for our rankings. Now standard deviations are calculated and analyzed as a means of ranking all of our key metrics. In doing so we have removed any tendencies we may have to incorporate personal biases into the rankings. Now more than ever the numbers do the talking. Standard deviations also provide a clear measure of how the ball is performing in relation to others. We have done a similar exercise with this year’s golf bag reviews and found it extremely useful.

Since manufacturers now are trying to make balls that perform under specific conditions it is also important to understand how it will perform when those conditions are not met. Most of us are not so precise that we can replicate our swing speeds every time we pick up a club. We have also seen through our analysis that there very often is very small differences in actual performance. This is why standard deviations are so helpful. Do you want to pay for a ball that is in the 99th percentile in cost and the 60th in performance?

So, what are we looking for when talking about the bestgolf balls for playing into the green? It is important that we detail the filters that we incorporated into our data set to come up with the short list of best balls. So here they are:

Once filtered our current data of approximately 60 balls was reduced to only 4 options. We then included some of our other metrics in our analysis to come up with our top 3 options. Here they are…. 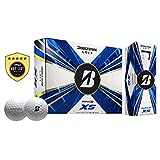 Bridgestone’s Tour B XS is a premium golf ball that has been getting a lot of love from both amateur and professional golfer’s. With names like Woods and DeChambeau fronting the message it is not hard to imagine the popularity. The B XS shows very solid results in its distance numbers but absolutely excels when we start looking at its performance into the green. If you’re a player who looks to get a little more bite on your approach it is a great option for you. It is marketed for high swing speeds and we did hit our apex in many statistics between 105-110 mph but it really did surprise us that even at slower swing speeds it held its own against many other golf balls. 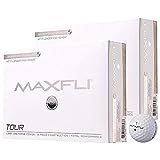 When you get a ball that performs as well as Maxﬂi’s Tour CG and saves you better than 30% less than the premium balls on the market it is worth taking notice. The Tour balances respectable distance numbers with top end green side spin, decent and feel. We actually finally made our final decision on the Tour vs Tour X based on the softer feel that will be preferable to many golfers when wedges come out of their bag. Its cast urethane cover provides a little more resilience than many of the other options out there and its center-of-gravity (CG) alignment and marking are if nothing else theoretically interesting. 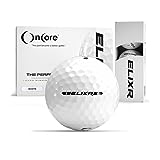 OnCore’s ELIXR is another example of just how far the performance of non-traditional golf ball manufacturers have come. The GAP in performance has been drastically reduced over the last years but the difference in prices still remain. There really is a solid argument for casual golfers to drop the thought that they need to spend more to realize better scores.

The ELIXR is a soft feel mid-compression ball. We found in our testing that its optimal results were achieved with swing speeds of around the 85mph mark. There was a significant relative drop off for high swing speeds. But if you are not a big swinger then don’t let that scare you off since it performed top notch for those it was designed for. It hit well above average results in ball speed, peak height and great decent and spin numbers with the mid iron to wedge game.