Our best golf balls for low swing speeds 2021-2022 ranking list takes a look at the best ball options for those golfers who are a little more “relaxed” when stepping up to the ball. It is well noted that age eventually catches up to just about everything, golf swing included. But age is not the only limiting factor. Many golfers who are starting out are better served at slowing down their swing. This allows them to focus on form and contact instead of swinging for the stars.

To get to our top options we restricted the results of our data set to conform with the topic at hand. So…We only considered the results from our ball testing data for the low-end of swing speeds. Of course there is also a difference in the relative swing speeds between the golf clubs. So a slow driver swing speed of approximately 70 mph is consistent with an 7 iron is swing speed of around 57 mph.

Our low swing speed ball review is part our core set of golf ball rankings. Our 2021-22 format limits our gear comparisons to two year cycles. We have found that it very often aligns with gear manufacturers life cycles given that products are generally not upgraded every year. We have also seen that release dates for new gear at time pre-dates the calendar year. So by crossing over periods we don’t risk losing anything in the margins.

Our new dual year format limits our core category ranking list picks to our top 3 options. Because of the we decided to also maintain a master ranking list. By doing so we keep a placeholder for all those options that may have fallen from our top spots during the evaluation period. So if you want to check out other top option they can always be found here.

Like all of our 2021-2022 golf ball rankings we have introduced a new methodology and basis for our rankings. Now standard deviations are calculated and analyzed as a means of ranking of all of our key metrics. We believe this helps filter out any tendencies to incorporate any personal biases into the rankings. Now more than ever the numbers do the talking. We also see a clear representation of how the ball is performing in relation to the others. We have done a similar exercise with this year’s golf bag reviews and found it extremely useful.

Manufacturers market their various ball models to optimally perform under specific conditions. We have seen with our testing results that sometimes this is less true than more. Maybe that is being a little pessimistic but at times there is so little difference in performance that for an average golfer one wonders is they would really feel it.

For example, a golfer with a low swing speed generally would not get the maximum performance benefits with a 3+ layered ball. Depending on the ball in question, they may not be able to compress the core to the point where they outperform a 2-piece ball. In this first batch of testing, we did test proportionally far more 3+ layered balls so it is impossible to make an absolute conclusion.

We did see however some balls that are marketed typically for higher swing speeds perform statistically very well. At least as far as the metrics go. For lower swing speed golfers, the feel of a very hard golf ball just may be overly unpleasant. Since they do not really realize the potential of the construction of the golf ball playing a nicer feeling golf ball with comparable seems like a logical path to follow. And more so when you factor in the price differentials there is more often than not a diminishing return in the “higher performing” marketed ball.

We implemented the following filters to our data set to short list the best golf balls for high swing speeds 2021-2022:

Once filtered our current data of approximately 60 balls was reduced to only 6 options. We then included some of our other metrics in our analysis to come up with our top 3 options. Here they are….. 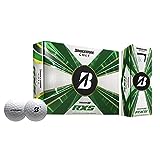 Not all premium balls are set up for the big swing and Bridgestone Tour B RXS is a perfect example of that. During our testing we did see balls that had pretty decent comparative numbers across an array of swing speeds. In the case of the Tour B RXS there was a definite comparative advantage in at the lower swing speed spectrum.

Bridgestone makes the divide for ball performance at 105mph between their ball models. At 105 you are still giving the ball a pretty good whack. Our testing and analysis really saw the biggest differentiation in performance from the pack in the 70-80 mph range. After that the comparative advantage was less pronounced or lost. So, whether you are getting up there in years or are just have a lazy swing there are not much better performance options currently on the market for a slow golf swing. 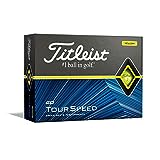 It seemed to make sense that the first review for a ball suitable for average golfers was a ball specifically designed for just that. Titleist’s Tour Speed was not made with tour level players in mind but rather those golfers who may seek to find a ball that gives them a little extra from the tee but still does not forget about green side spin.