Our Best golf drivers for low handicappers 2021/2022 rankings is our newest driver subcategory review dedicated to golfer’s skillsets. Hopefully it will make a little easier for you to find the right driver for your game while comparing it to similar options on the market. We plan to take our core articles forward year on year replacing the later year with the newest options.

We are bringing the new dynamic rankings list approach to how we manage our driver reviews for 2021/2022 and going forward. The biggest difference is that we will limit each specific driver review category to the top 3 entries. For those that fall from the top ranks they still can be found on the master ranking list.

Our low handicappers are our top skill group with handicaps rated at 10 or better. Many amateur golfers strive to achieve a single digit handicap. But for most golfers the goal is never realized since less than 5% of amateur golfers will reach this level.

In order to achieve a low handicap consistency becomes of utmost importance. There just is not enough room to throw away too many strokes at this level. Of course, there is a linear relationship between consistent results and a consistent golf swing. Because of this, manufacturers are able to tradeoff some features favoring forgiveness to optimize output. Because of advances in technology these tradeoffs are not nearly as severe as in years gone bye. Still average golfers may tend to struggle trying to use such drivers.

There is a definite correlation between swing speeds and better handicaps. A 10 handicap golfer averages approximately 5 mph faster than the average golfer. As golfers reach the lower side of single handicaps their averages increase by about another 10 mph, reaching averages of 106 mph. The optimization of driver lofts, lies, target trajectories all need to be considered under a different set of standards at such speeds.

We have seen that manufacturers have tried to shift their performance drivers appeal to the higher side of the low handicap range and up into the mid-range. The fact is that to appeal to only 5% of the market is not perhaps the best business model. They also are aided by the fact that many golfers tend to play clubs that are not optimized for their set of skills. Marketing and dreaming of hitting the ball like your favorite golfer still go a long way:)

If you have a solid game from the tee then here are our current top picks for the Best golf drivers for low handicappers. Remember to check back to see how it evolves over the upcoming season. 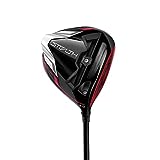 We were fortunate enough a few weeks ago to have a friend of a friend hook us up with a demo and trial of the new TaylorMade Stealth lineup. Since we are not so high in the order of merit, we wait patiently hoping to get our turn.  This time we actually beat the February official product launch so we can’t complain too much:)

There is a lot of marketing and hype for the Stealth driver series that at times comes across almost as over the top. The end of the Titanium era…..etc etc is almost mission to Mars kind of stuff. Kudo’s for TaylorMade for their innovation and making a great piece of gear. But will carbon replace titanium as the new standard? We will have to wait and see.

We avoided getting to bogged down in the detail and stayed focused on our own experiences with the clubs performed. In the end the question we are looking to answer is would you buy the driver and under what conditions would you do so? Much like last year’s SIM2 line, TaylorMade has tweaked the setup of the various drivers in the Stealth line to better align different the demands of different types of golfers. So, the first up on the list, TaylorMade’s Stealth Plus driver.

Why is the Stealth Plus the right TaylorMade option for you?

Normally I would say this driver is best suited for a low handicapper. It may also be the right choice if you are mid-level player whose performance off the tee is not where you are losing your strokes during the round. Its mid-flight ball launch also is better suited for players with higher swing speeds and it generates the lowest spin numbers across the Stealth line. So, it really is geared up as a performance first driver. The other big difference is the sliding weight track that allows you to adjust the driver setup for preferential ball flights. Again, this is something more in the focus of a low handicap player than concerns a lesser skilled golfer.

Since this is the third year in a row TaylorMade has put a new driver on the market claiming performance improvements, I think it is important to distinguish what we are comparing the Stealth Plus against. Its predecessor, the SIM2? or the rest of the market.

Aesthetically, let’s just say it is pleasing. There is a simple yet elegant meanness. It jus tells you that it is going to hit a ball a long way. Maybe that sounds a little like whisky tasting but it is a great looking driver. It does take a step forward from last years models and fulls away from the top echelons of the driver market. But since this is not a fashion show the real deal needs to be on its performance.

If we talk about ball speeds and distances achieved, the Stealth does excel, but to be honest this is not something that was an issue with last years driver. Neither myself nor my colleague would have been able to swear that we achieved better distance results than we are getting from our current SIM2 drivers. Even TaylorMade’s controlled testing in my opinion shows only nominal improvements in this area that are far less than my own deviations off the tee. Now if you compare the results against the other offerings in the market you are still getting one of the top if not the longest driver out there.

Where I saw the biggest difference and improvement from this year’s offering was its forgiveness. Now maybe this is easily explained by the increase in face size allowing you bring your mishits still closer to center. Or maybe it is the 60X carbon face or a combination of both. The fact is the Stealth plus is more forgiving, which is really for us the true selling point. And delivering a club that did not lose swing speeds while increasing face size the true achievement. But is it enough?

I was looking for a new driver then I would not hesitate to make the Stealth Plus my driver of choice. The fact is that there is not really anything that I came away feeling that it underperformed the SIM2. Being partial too TaylorMade’s latest offerings I have little doubt that this would be the club that I would put in my bag.

Having now purchased 2 new TM drivers in the last 2 years can I justify doing it 3 years in a row? Probably not. The Stealth is a premium driver and while it is not priced outside of what could be expected it still is a significant enough for my pocket book to take notice. If TaylorMade are committed to carbon as the way forward material of choice then I am sure there is a Stealth 2 in the not-so-distant future.

There is the last scenario, you are looking for a driver and thinking to now grab a SIM2 and save a few dollars. Of course, as soon at the Stealth line there was a significant drop in the SIM2 pricing and there are deals to be made in retail as well as used options. I can only say that when I look for replacement gear that I try to take the best option available that I can afford. So, in this case if I could find the extra USD 100-150 dollars I would be sticking with the Stealth.