When I sat down to write our article about the best golf drivers for a slice, I started to laugh to myself about the love hate relationship that exists between many golfers and their drivers. Just in the last week I have played with a golfer who was meticulous off of the tee with everything from a 2 iron through his 3 wood but once his driver came out it was like the wild wild west.  The same week I played with a young golfer playing off of a 10 who had an incredible golf swing and the driver never appeared in sight the whole round.

Given the above it is no surprise that the golf manufacturing community has looked to appeal to those who are adrift off of the tee with bias drivers to attempt to minimize misdirection. Let’s face it, there is an endless line of golfers who believe the equipment is more responsible for their troubles than their swing is, and this is great for the manufacturers.

So before continuing I want to make it very clear. None of these or any other bias drivers will fix your slice, only fixing your swing will resolve the slice problem. What they can do is potentially keep you 10 or so yards back in the right direction. If you feel that you are always around the fairway but are struggling on the edges then maybe a bias driver will make sense for you. For the rest who are more erratic off of the tee ranging randomly between a fade and a banana 2 fairways over I would suggest you invest in your swing not the equipment.

And the positive is that these bias drivers do work and do help minimize your slice. So, if you are a golfer who occasionally sees their ball fade from the tee box then they also may give you a little more confidence from the tee. We have taken a look at what is out there are given you our best options for the Best golf driver for a slice.

When putting together our recommendations for the best golf drivers for a slice it was not only about slice protection but also about a driver that performed exceptionally well off the tee. That being said it is no surprise to see the TaylorMade Sim2 Max D at the top of our list given how well we TaylorMade’s other drivers have fared in our testing and trials.

Like its twin brother, the Sim2 Max, which stands at the top of our Best drivers for mid handicapper rankings, the Max D is also perfectly suited for the mid-level golfer. Low handicappers’ games should be generally more geared towards the performance drivers while high handicappers still should consider more game improvement options. The right to left shape is realized by the addition of extra weight applied to the heel of the club helping the golfer squaring the club face at impact. Otherwise, the look, feel and construction if the Max D is very close to a clone of the Sim Max.

Having played for the last 2 seasons the Sim Max and now the Sim2 I am quite familiar with the look and feel of the Sim drivers. Because I still do play a fade on occasion (I spent many hours getting a problematic slice out of my game some years back), I was very interested to give the Max D a try.

Over the course of an intensive driving range session, I launched ball after ball straight and with similar distance I was achieving last season with my Sim Max. With my new Sim2 set up and xtra stiff shaft I am getting about 30 more yards of carry this season but I felt this club much more in line to last years efforts. While it is not easy to generate empirical evidence since I did not have my Mevo+ setup I can say that I was rarely on the right side of the fairway. As a percentage the number of fades I was hitting definitely decreased. It did not cure the sessions mis-hits and pulls but on what I would consider good contacts there was definitely a slight improvement.

It is worth mentioning that the Driver head weight is 7.16 ounces / 203 grams which comes in a little heavier than others. It is also leaning towards almost an oversized head or slightly larger than out other picks. If your familiar with the Sim lineup then this won’t be a surprise.

So, if you are looking to tweak your game a little to the left then the Sim2 Max D would be our choice for the best golf drivers for a slice.

Forged Ring Construction is the key to unlocking a new dimension of distance and optimal forgiveness with SIM2 Max•D. Crafted from a lightweight and high strength aluminum that’s precision milled, it unites the critical components of the driver head into a singular force. Forming a driver built for forgiveness and power, designed to give you the confidence to take on any tee shot.

Traditional draw-bias drivers come with a tradeoff, sacrificing forgiveness for right-to-left ball flight. We’ve journeyed beyond tradition to deliver forgiveness and the ball flight you need. The reconstructed SIM2 Max•D features a repositioned Inertia Generator that’s closer to the heel, encouraging a heel CG that’s low and back for more forgiveness. The end result, a draw-biased driver without compromise.

Building on the breakthrough performance of Shape In Motion, SIM2 Max•D features an all-new Inertia Generator formed by its 9-layer carbon sole. The lightweight panel is strategically angled to improve aerodynamics at the most critical phase of the swing for faster clubhead speeds. We moved additional weight to the rear of the club to encourage higher MOI and optimal launch properties.

THE FACE OF SPEED & FORGIVENESS

The milled back face cup is crafted from high strength titanium to encourage fast ball speeds. Internal milling varies face thickness and pinpoints performance where golfers need it the most, making way for an intelligently optimized sweet spot that covers the most common impact areas. A new toe side Speed Injection Port lets us more efficiently calibrate each individual head to the threshold of the maximum legal limit of ball speed while Twist Face® continues to help all golfers find more fairways.

Our Runner Up – Best golf drivers for a slice

The runner up on our best drivers for a slice is Callaway’s Epic MAX. It really may come down to personal preferences since both drivers do as advertised and helping you keep the ball from the left side of the fairway. Like the Sim2 Max D the Epic MAX gives a high launch flight and is best suited from average to fast swing speed players. But with is slightly lighter club face weight some players will be able to realize those speeds with a little more ease.

The Epic MAX delivers a very forgiving club face and we actually felt that it seemed to handle poorly struck balls more favorably than the other contenders in our ranking. It features an adjustable sole with a 16g sliding perimeter weight and OptiFit hosel. By position the sole weight towards the heel yielding more draw bias so it does provide ultimate flexibility as far as customizing on the go. For many golfers this will be viewed as a big plus but I do question the game improvement/mid handicapper benefitting from playing with the setup of a golf club. I would rather lean towards working on the swing consistency rather than continuously tweaking the drivers club face.

There is not much that separates our top two and from a price point they retail at the same price point. Ultimately, we decided to go with TaylorMade’s offering because we chose performance over forgiveness and flexibility. Depending on your level this may not be the choice that is best for you and in that case, you may lean towards the Epic MAX. Either way they are both quality drivers that provide the draw bias you are looking for.

Epic MAX creates exceptionally high forgiveness, starting with a lighter, stronger Triaxial Carbon material that saves over 19 grams of weight vs. titanium. Then we redistribute that weight to promote high launch and more forgiveness. This driver delivers an exceptional

With a 16g sliding rear weight, golfers have extensive adjustability to promote the ball flight that they want to play. Combined with the OptiFit hosel, the Epic MAX provides up to 20 yards of shot shape correction.

Our next Pick – Best golf drivers for a slice

Our last recommendation for our best golf drivers for a slice is Mizuno’s ST-X DRIVER. Of all of the drivers we considered when coming up with our list this was definitely the driver that surprised us the most. Maybe our own bias’ kept it from ranking higher but we really did enjoy our time on the range giving it a go.

There are two standard setup options available with the ST-X DRIVER. The J-spec option geared towards light weight shafts with a club head weight at 194 grams and the regular shaft option with a 204-gram weighted head. The latter being similar to my every day driver is the one I decided to use in the trials.

The ST-X DRIVER “super alloy titanium” face has been said to be upgraded to allow more clean contact area. While I can’t really attest to the difference what was clear is that we really struggled to find many poor contacts in several hours on the range. So there really is a lot of forgiveness in this driver. The face also is quite upright resulting in a lower ball flight that we saw with our other ranked drivers. So, depending on your swing and normal ball launch this might be something you want to consider.

We did not quite get the same distances from the ST-X but it is also generally not set up for the higher swing speeds as our other top picks. This could also be tweaked with some shaft adjustments that align with your game a little better. There have been some decent tour results this year as far as driving performance with the Mizuno drivers so we don’t want to be too critical here but we did seem to get more out of the out of the box offering as far as distance was concerned.

From an spend point of view the ST-X has a clear advantage over the others as it regularly retails somewhere around a hundred dollars less than the others so if you are trying to keep within a budget this also may incline you to give it a closer look.

If you get the opportunity, we would really suggest you give it a try. For many of us we are very used to pointing to the “leading” manufacturers when we are looking for new equipment. Instead, companies like Mizuno have really upped their game in recent years closing the gap and leveling the playing field as far as performance products that from a price performance ratio point of view are actually leading the way. And this is why we are happy to have the Mizuno ST-X DRIVER as part of our recommended best golf drivers for a slice rankings.

As a high strength Beta Ti, SAT2041 maintains its characteristics and resists micro fractures for longer than the commonly used 6-4 Ti.

Refined to maximize the return from Mizuno’s Beta Ti face. Ball speeds most noticeably improved low on the clubface.

The majority of Mizuno’s tour players expressed a preference for more dense feedback through impact. Mizuno’s engineers spent a year finessing the sound to a more muted, powerful tone.

This year I am tracking all the balls I find during my golf rounds to come up with this years winner of the OFF PIST GOLF BALL OF THE YEAR. If you would like to see if any of our recommendations strayed from the fairway come take a look. 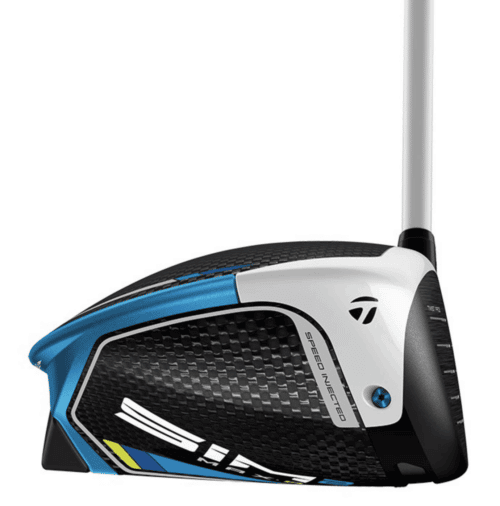