Our Best projector for golf simulator rankings is the result of meticulous analysis, trials and comparissons of the projector’s market. When I was asked by a good friend to assist him in building his home golf simulator I jumped at the opportunity. Step by step we have been digging into the various components of this endeavour to ultimately come up with a premium grade golf simulation package.

Just to say upfront, he has much more flexibility with space and budget than most do (including myself). It really has been a lot of fun. The project has given me the opportunity to dig into some new gear that I might never have done otherwise.

The key projector characteristics we paid particular attention too while deciding on our top choices include:

This is a no brainer. The overall enjoyment of the simulator is obviously greatly diminished with a poor and unclear image. I heavily lean towards and favour laser and 4k technology. The power and demands of golf simulators will only increase over time. To take old technology today may only lead to disappointments tomorrow.

The reality is that most of us do not have unlimited space to build a golf simulator. This limitation also impacts the space available for our projector to generate the larger sized images on the screen. This is where throw ratio comes in. To avoid shadows many projector projects require the projector to be placed in-front of the golfer. Typically this usually requires a throw ration of between .5 to 1.

Projection image = width/height. The native aspect ratio represents the projectors natural best image. While most allow you to change this ratio it results in a loss of picture quality. Ideally you should choose a native aspect ratio that best suits the room size you have available. Unfortunately most people do have logistic constraints. So it is also important to have a projector that offers the flexibility to accommodate multiple setups.

Depending on the ambient lighting of the surroundings brightness (measured in lumens) is critical to being able to see the projected image. Imagine going to a drive-in movie in the middle of a sunny afternoon. While lower levels may be OK for darker areas generally the higher the lumens the better.

There are many other characteristics we weighed while making our decisions such as contrast, warranty’s, power consumption, life expectancy, price, connectivity etc etc.

Other than your simulator itself, the projector is the next most important element in the package (assuming you are not buying a separate building next door 🙂 ). So, if you plan on investing in a mid to high end simulator it makes little sense on not pairing it with a comparable projector.

Here are the best options we found currently on the market that we feel are suitable to be added to a serious golf simulator package. 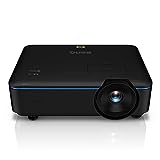 While looking for the perfect projector to integrate into my friend’s golf simulator project I was lucky enough to have fewer constraints than most may have. He had ample space and budget to utilize for the eventual simulator. After a lengthy search and numerous trials and comparisons the BenQ LK953ST rose to the top of our short list.

The UHD 3840 x 2160 resolution quickly impressed. I actually never was a big fan of projector’s when it comes to my personal entertainment center but after watching video on the LK953ST I may have reconsidered my position. The images where clear and crisp and the 3,000,000:1 contrast gave incredible depth and differentiation across the screen.

With the .81 throw ratio it is comfortably suitable from mid-sized to larger spaces. Given the large space we have available we would still able to use the native 16:9 aspect ratio projecting into a 14ft wide screen. The projector would be just under 12 feet from the screen and a couple of feet infront of our striking point. While we have the space to most likely avoiding having to shifting the projector it is important to keep in mind that the lens shift capabilities of the LK953ST would allow between a 3-to-5-foot shift and still hit center target. So, for those with more space restrictions it provides great flexibility.

BenQ’s LK953ST with its 5000lm high brightness is able to produce vivid images in bright environments making it adaptable to any typical simulator lighting conditions. It also makes it suitable for the demands of top end of simulators on the market such as Trackman 4.

With its 5-year warranty, a laser light sources guaranteed for 20,000 hours and highly durable DLP chip rated to last over 100,000 hours without degradation you are getting a projector that will last a ton of golf rounds before you ever need to worry.

Some of the other features and specifications include:

The LK953ST does require a reasonable sized investment but if you are putting together a top-level simulator, I would actually suggest it breaks par. You very often see the top simulator packages paired with projectors in the 5 digits and up. The bottom line is that we looked at many projectors for the golf simulator project and few met the mark but there was no doubt that BenQ’s LK953ST Dlp Projector did. 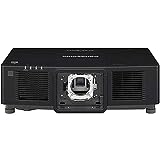 If you can check all of the following 3 boxes…

then the Panasonic PT-MZ16KLBU is waiting for you to give it a test run.

As I have previously mentioned, I was fortunate enough to be helping a friend who could check the above, so we did just that.

The PT-MZ16KLBU, despite being a compact & lightweight projector, has a ton of power underneath the hood. Its Triple Laser Engine and 16000 lm brightness capabilities make it almost impossible not to have flawless color, brightness and fidelity. Layer in a 3,000,000:1 dynamic contrast ratio and the definition you are getting is actually overkills 99.9 % of the scenarios you can come up with for your golf simulator.

To justify the investment here one really needs to also be considering/implementing a full-on entertainment room or man cave. With the full 360-degree multi axis orientation and flexible ceiling or surface mounting options the PT-MZ16KLBU give you an incredible amount of freedom in room design and logistics. The image can also be set for and either front or rear projection so you can really dream up the perfect entertainment facility.

Remember when I mentioned about the cost? Well now comes the part where I mention the lens is not included. And you guessed it, they also don’t come cheap! We tried a couple of the options but the ET-EMW200 was in the end the ideal candidate for the simulator.

With a throw ratio of between .48 to .55:1 it made the set-up extremely unproblematic. With the PT-MZ16KLBU’s 16:10 native aspect ratio we were able to still it the 14-foot desired width at a mere 8 (gaining 4 feet) feet and at 9 feet in height also gain a foot vertically than our other top contender. It really removes the projector as a constraint in the room set up. There are seven lens options available and several are potentially suitable for a typical golf simulator scenario.

Since the lens can run around 6k we strongly suggest you sell yourself on the merits of the camera, begin laying out the simulator’s environment and physical space and then finalize the lens choice. As mentioned, there is a lens that will work with basically all set-ups so it does not need to be the first decision point.

Panasonic’ PT-MZ16K is packed with features so to name a few:

We debated amongst ourselves about mentioning the PT-MZ16KLBU given its cost it seemed beyond the means of most. But in the end, it was hands down the best projector I tested and ultimately the projector of my friends choosing for his project. The only reason I pushed it down from the top spot in our initial rankings was that the cost is prohibitive and technically beyond the needs for most golf simulator only packages.

When we were in the final stages of deciding on the various components for the project my friend made an interesting point. If Trackman comes to build your golf simulator the basic no frills package would start at 50K. I am sure I would be thrilled with it and might not leave the home until my girlfriend actually threw me out of it, but its projector would not be anywhere as nice as the PT-MZ16KLBU.