Our best golf putting mat 2021/2022 rankings is part of expansion into looking at the best training aids in the market. With putting being a vital component in your game and your ability to produce good scoring the putting mat can be a great inexpensive tool to keep your putting stroke in sync.

This past season a friend and fellow golfer started to use a putting mat each day at home regularly. Even during home office conference calls, he would often be on a headset and taking his 100 putts a day. The transformation in his putting was incredible. Not only did the frequency of short missed putts almost turn to non-existent, those non expected putts started to fall. By the end of the season, he was putting with the short side of his putter. Even in tournament play, for 2-3 foot putts, he was dropping them down like they didn’t matter from the toe of his putter.

While I would not recommend the above what it does show is how confident and efficient you can become with a solid putting stroke. How do you achieve this? PRACTICE IT!

The great thing about a putting mat is that it does not take up a lot of space, most can be rolled so to avoid home disputes on living room decorations and they are relatively inexpensive. You don’t need to always been on a golf course or green to enhance your putting stroke’s consistency and actually the amount of time you save in the car could translate into a ton of putts.

Like all of our new ranking lists we limit our picks to our top 3. Since the list is dynamic it can evolve during the season as new products come to market. Those products that slide from the top can always be found in our best golf training aids 2021/2022 master ranking list. So, if you don’t find what you are looking for here take a look. 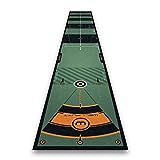 WELLPUTT has been developing putting training aids for better than the last decade. We were actually somewhat surprised just how many reputable references stand behind the product. In the end it is just a putting mat, isn’t it?? Once we actually started taking a closer look and giving it a try, we started to understand why.

The 13ft Mat is WELLPUTT’s original training mat and is proclaimed to be “the most scientifically accurate in reproducing real-life green conditions”. While we don’t know how to validate the statement, we also have come across no reason dispute it.

Everything that has gone into this mat is focused on training a player’s ability to master their accuracy and speed control. The mat itself has a lot of clever and intuitive features built into it including:

While other mats may have similar concepts and markings included into their product line few have taken it to this next level. Wellputt has developed a supporting App (iOS & android) to help you not only help you practice but maximize the enjoyment while doing it. With more than 50 exercises, 3 challenging courses and score cards they have helped practice time feel more like fun time.

If you are looking for a top end training mat this is definitely worth your time to take a closer look. 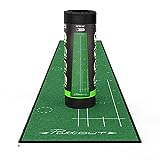 PuttOut has been making quality putting training aids for some years now. They offer a line of handy devices designed to help you strengthen your putting stroke and efficiency on the green. And their golf putting mat are front and center of their product lines.

There are several sizing options to choose from depending on your demands and space constraints. We have gone with the large putting mat since the space is available. Additionally, all of the mats are rollable and come with carry case so there is no need to leave them lying around when not in use. The large mat is 12 x 2.2 ft so there is a lot of run way to practice your putting stroke.

With five independent targets and a selection of alignment lines and foot markings, the Large Putting Mat is more than a simple back-and-forth, it’s a full practice area for you to vary and change up your routine every time you roll it out.

Measuring 10 on the stimp meter, the PuttOut putting mat rates as a medium to fast green. I personally prefer practicing on surfaces on the faster side of the meter since it really emphasizes mistakes in the putting stroke. PuttOut’s golf putting mat is crease-free so it will roll true and let you concentrate on your stroke not the lie of the land.